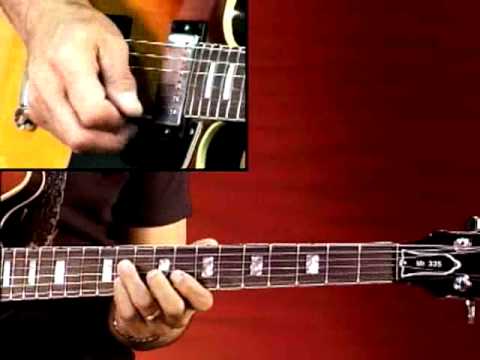 A colorful rhythm part like the one we just laid down helps feed me solo ideas, so I keep an ear out for those altered chords and rhythm changes when I improvise.

When I heard that raised 9 chord on the first chorus, I felt the blues – so I responded with some bluesy lines. Because the next chorus contained more altered chords, it reminded me of the comping you hear in a lot of bebop music – so I responded accordingly.

If the rhythm part is establishing its own sound – say, a major or minor approach – the soloist can play freely but has to listen carefully. As always!

When I’m not sure which direction the guy comping is going to go in, I like to play parts that don’t commit to major or minor one way or another. If you can avoid the chord tones like the 3rd degree – since a major 3rd says “major” and lowered 3rd says “minor” – you can keep soloing until a chord change suggests a clearer context to work within.